Any time you purchase something new, there’s bound to be a learning curve. Appliances, tools, vehicles—even when they’re familiar objects or designs, each one can present its fair share of quirks and challenges.

If you’re approaching your e-bike with a bit of trepidation about how exactly to use it, don’t feel bad: This handy seven-step guide will have you confidently on the road in no time.

Step 1: Get that bike

First things first, you’ve got to get the e-bike itself! Shop around to see which brand and model fits your lifestyle and price point -- if you’re just starting, you might want to get an affordable bike to see if you take to it before committing to a more advanced e-bike with more features.

Shop around your area for e-bike dealerships close to you, or purchase one online. In the case of the ZuGo Rhino, we ship anywhere in the continental United States.

While e-bikes look a lot like traditional bikes, they’re not the same. Don’t let their similarities make you gloss over their differences. Take some time to learn every inch of your new e-bike so you know where it’s the same as a traditional bike and where it offers something different.

Pay special attention to three factors especially: battery, display screen, and throttle. For the battery, identify where it goes and learn how to properly seat and remove it.

Also make sure you can find the display screen, typically on the left handle. Practice turning it on and off and learn which buttons to use to change the pedal assistance settings.

Finally, if your e-bike’s a full-throttle style e-bike, be sure to locate the thumb throttle.

Now that you know where the battery goes, it’s time to make sure it’s fully charged. Depending on the battery, some will have display lights on the battery that will tell you its charge status while plugged into a charger. Classically, it’ll give you green for fully charged, red for anything less.

If your battery doesn’t have the display lights or if, for whatever reason, you want to know something more specific than just “not fully charged,” the display screen can provide you the answers.

Properly seat the battery in the bike and turn on the screen. The display will typically give you a few different readouts like speed, pedal assistance level, and, most importantly, in this case, percentage of charge. While a full charge is ideal, a quick battery check can let you know the battery is at 87% charged, more than enough for a quick run to the corner store and back. Other times, it’ll let you know that you’ll need to wait a bit longer for that 45% to go up if you want to spend the day exploring a bike trail. 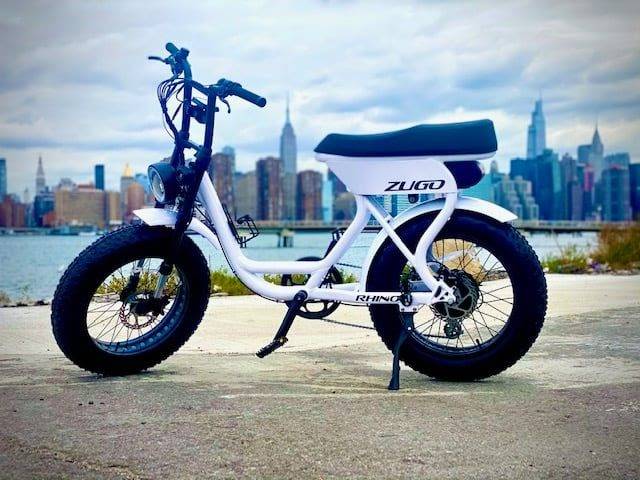 As with any vehicle, an e-bike does have specific laws that govern its use in your town, county, and state. If you want to ride your e-bike in a way that’s fun and safe, best to keep yourself on the right side of those rules.

If you know the expectations of bike riders in your area, that will be almost all you will need to know for most places. This means you know the hand signs to indicate turning or stopping, you’re aware of how to properly ride your bike on the road, and places in your town or areas close by where bikes are allowed.

Since e-bikes do differ in some ways from traditional bikes, though, some places do have other additional laws to guide your e-bike usage.

A site like Nolo can provide you with the proper links to look up any federal, state, or local statutes that may apply to your e-bike usage. If you’re at all concerned you might be missing something, you can also reach out to your town hall and ask them to direct you to the proper office or website to answer any of your lingering concerns.

The key to a great time is making sure you aren’t still wondering how the bike works by the time you climb aboard. Once you know where the battery is, how much charge it has, and where to set your assistance level, you’ll be free to more fully focus on the fun that e-biking offers.

In practice, the actual mechanical process of riding an e-bike’s the same as riding a traditional bike. You push the pedals with your feet and that motion moves you forward. With a full-throttle e-bike, it’ll be more akin to those times you’re going downhill in a traditional bike. That is, sit in the saddle, focus, steer, and let gravity—the motor in the e-bike’s case—do the work of moving you. 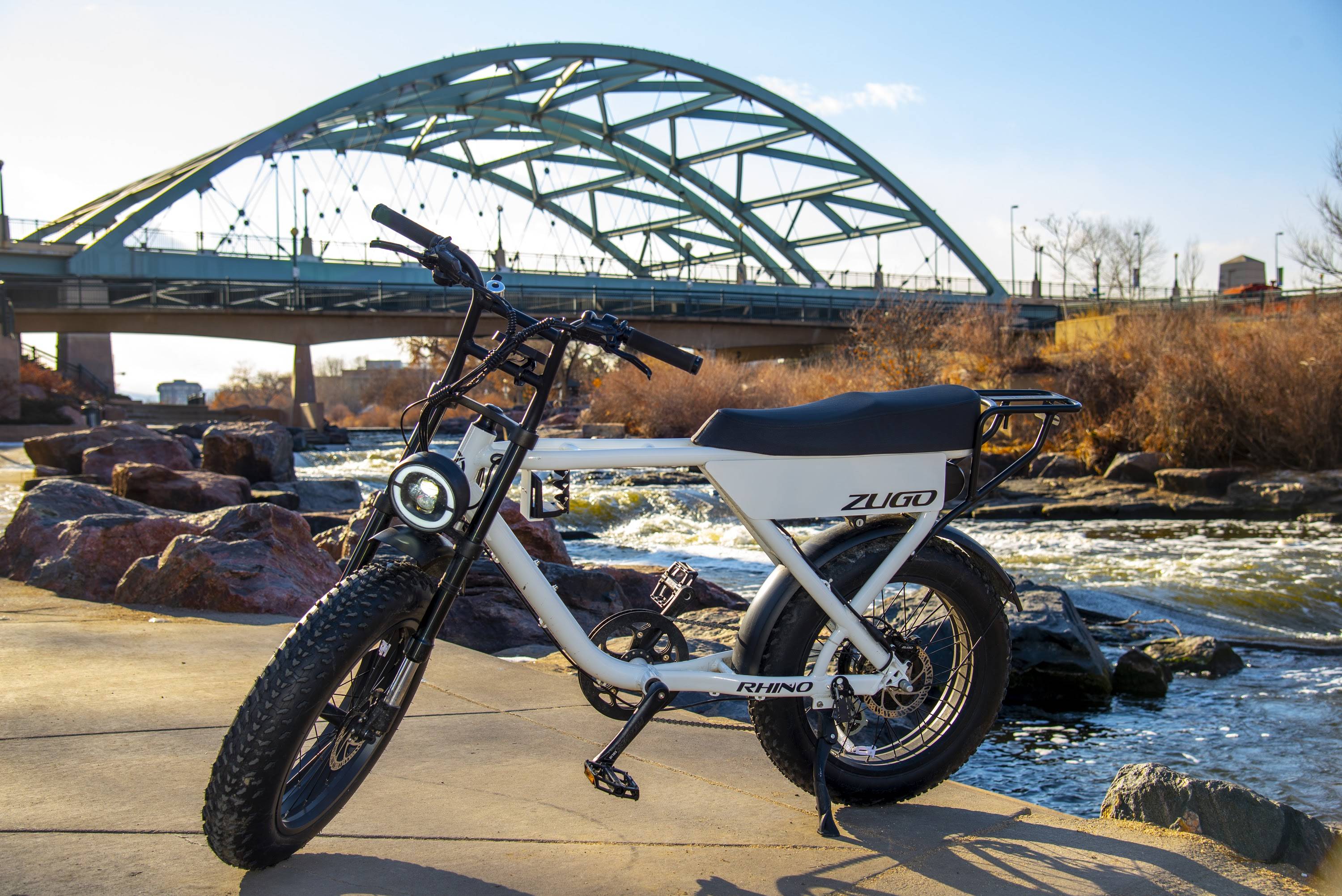 As noted above, riding an e-bike works almost the same as riding a typical bicycle. But we can’t forget that “almost” isn’t the same as “exactly.”

Because of the small differences, there are several aspects of the e-bike that you’ll want to get to know when you first start taking it out on adventures.

Due to the motor and structural differences, e-bikes are heavier than traditional bicycles including street and mountain bikes. Sometimes an e-bike might be up to three times as heavy as a bike on the same road or path. Because of this, e-bikes will often take longer to get going fast and to stop and handle differently than their un-motorized cousins.

While it’s fairly easy to learn and adapt to these differences, you’ll still need to take the time and put in the effort to do so.

The weight also contributes to the second difference you must be aware of: the e-bike’s velocity. As it’s heavier, it’ll go slower uphill—when assisted—and faster downhill when gravity gets ahold of it.

The bigger thing is, though, you likely will be riding assisted at some level any time you’re on an e-bike. Even with laws limiting the top speed a motor can propel you on an e-bike, this means every time you pedal, you’ll be generating a higher rate of force than you have before. As a result, you will likely be consistently riding faster than you did on a pedal bike. That’ll take some getting used to for you and those around you.

E-bikes offer different assistance settings, ranging from no assistance at all through maximum assistance and even full-throttle on some bikes. There are no “correct” choices when it comes to your settings so it’ll be up to you to find out what works best.

Try them all in a range of settings, terrain, and inclines to figure out what fits best for you. Also, you’ll want to see how each setting affects the bike’s handling, how fast you’ll go, and what kind of reaction times you’ll need for each setting to be safe for you and others.

Finally, you’ll want to make sure you know how braking works for you.

E-bikes use disc brakes, as opposed to the caliper brakes usually seen on traditional bikes. Disc brakes are significantly stronger than caliper brakes. They offer quicker and harder stops. This is also the case when compared to cantilever and v-brakes, which you see far less often and tend to come more on mountain bikes or bikes specifically customized for off-road use.

These disc brakes will feel different than the other types listed above. There’s more nuance involved in their use. So, as with the assistance settings, take some time to see how it feels to use them at different times and different speeds.

One thing to keep in mind as you put them through their paces: there’s rarely a reason to fully and completely engage them. Doing so will create a very abrupt stop and one that you might find very uncomfortable.

Step 7: Navigating around others

Some, and likely most, will assume your e-bike’s a traditional bike at first glance. As a result, they will likely look at you like you’re a traditional cyclist. While this isn’t bad shorthand, it’ll sometimes lead them to misjudge things like how fast you can go and how long it might take you to stop.

To ensure their confusion doesn’t get you or them hurt, you may have to do more communicating than you did while riding a traditional bike.

Some of them will be familiar. E-bike riders still employ tried and true methods of conveying position by calling out “on your left” or “on your right” while approaching other people on bike paths or in parks.

You may want to include additional quick burst information like “coming up fast” to ensure people have an expectation of speed when dealing with you.

In other situations, you’ll have to be the one to alter your behavior or trajectory to look out for everyone’s safety. As detailed in Travel Safety and Behavior last year, verbal cues will typically be effective when “passing”—that is, moving with the flow of traffic.

When you’re “meeting”—moving against the flow—it’s more about what you do, not what you say. Travel in a straight line and at a consistent speed as much as humanly possible. While meeting, use of the throttle on a full-throttle e-bike would typically if ill-advised as even if it gives you a consistent speed, it may simply be too fast to navigate a crowded path.

In all situations, be they meeting or passing, on the road, on a path, or off-roading, paying attention and being cautious will always be the best approach to keeping you and everyone you encounter safe.

Now that you know how to best ride your e-bike, it’s time to head back to step 1 and start your e-bike journey with the ZuGo Rhino.