Recent reports indicate that the e-bike market was valued at 15.42 billion in 2019, and is predicted to grow by 7.49% each year from now until 2025. With that in mind, you might be wondering: What exactly is an e-bike?

The quick and easy answer is, of course, a bike that is partially powered by an electric motor. But there’s a lot more to the e-bike than that simple definition. Together, we’ll explore where the e-bike comes from, how it works, and what it offers the consumer.

Welcome to the past

The ZuGo Rhino is here, now, in 2021. If you’ve been interested in e-bikes, you may have been reading about them for five or ten years before this. But the e-bike has existed longer than that. Much longer.

To find the start of e-bike history, we need to look back to the late 1890s and the bike boom. A dive into the American patent office reveals what seems to be the first instance of a bike powered by an electric engine in 1895. This model, invented by Ogden Bolton Jr., added a rear motor to the bike to help offer further locomotion.

A year later, Hosea W. Libbey created a version with a motor located in the crankset axle. In 1898, the first electric bike to incorporate a belt to offer further support was patented.

Finally, in 1899, John Schnepf patented a friction-style motor, something that we might now consider a distant ancestor of the modern car hybrid engine.

With the passing of the bike boom, attempts to invent an e-bike for the ages also diminished. Seventy years later, the 1899 patent ends up redesigned and updated by G.A. Wood Jr., but even this new model doesn’t seem to spark much of a trend.

While there are other blips over the years, little progress seems to be made. In 1992, the most significant push for an e-bike yet came with the Sinclair Zike. Despite enthusiasm and capital, the Zike doesn’t make waves. About 2,000 units and 6 months later, the whole initiative ends. The result? a financial failure.

Despite its failure, the Zike seems to be a catalyst of sorts. A year later, Yamaha introduced a pedal-assisted e-bike. While not a massive seller, interest rose and between ’93 and ’04, production increased by 35%.

Three years later, China was being an upward of 18 million bikes a year and over 1,000 companies had sprung up to fill the need. The e-bike had well and truly arrived.

When it comes to the modern e-bike, consumers have two basic styles to choose from.

The most common, the class that the Rhino belongs to, goes by the term pedelec. This one gives the rider a more bike-like experience, supplementing your pedal power with motorized assistance. This model won’t get you anywhere unless you’re willing to add in your effort.

Then there’s the “Throttle assisted” e-bike - these tend to adhere more towards the kind of motor scooter many picture when thinking of e-bikes. This one you can propel like a motorbike by opening up the throttle. You can also pedal if you choose. But if you don’t move your feet at all, the motor will still propel the bike.

The most significant difference is, of course, the electric motor -- the thing that puts the “e” in e-bike. As retailer Bicycle Junction puts it, “E-bikes can come in many styles, from commuter bikes to full-suspension mountain bikes, and everything in between.”

Given this variety, e-bikes don’t all use the same kind of motor. For the most part, there are two main categories of e-bike motors: crank motors and rear hub motors.

Crank motors evolved from the 1898 Hosea W. Libbey-created model. They tend to provide riders with an experience more akin to a traditional cycling experience, especially for those who are serious cyclists. You pedal harder, the engine works harder. You slack a little, so does the motor. It’s like biking with a boost. For serious cyclists, the transition to a crank motor will feel great.

The hub motor, on the other hand, can claim the original 1895 e-bike as its distant predecessor. It, arguably, presents a better fit for most of us, since they offer more consistent pedal assistance. You can adjust the level of assistance from minimal to as high as 80% support. Once you pick the setting, it will continue to offer that rate of support consistently, no matter how hard you’re pedaling.

Although e-bikes and standard bicycles look very similar, lifting one will quickly clue you into another key difference: E-bikes simply run heavier. The average e-bike will be somewhere between 38 and 70 pounds.

In comparison, street bikes tend to be more like 17 pounds, while a heavier style of a traditional cycle, say a mountain bike, will only tip the scales at 25 pounds.

This speaks to their differing purposes. Since traditional bikes are entirely dependent on leg strength and gravity, they’re built light. There’s no need to make things more difficult on the rider, especially going uphill.

E-bikes, however, need to be more structurally stable to handle the motor and generally higher speeds. Hills don’t represent the same issue because the motor is there to help in those exact circumstances.

In the United States, e-bikes are not allowed to offer speeds faster than 32 miles per hour. Professional cyclists can achieve speeds as fast as 45 miles an hour on pure pedal power.

This may seem confusing. E-bikes should be faster, right?

Yes. And in reality, they are. That 32 mph speed is a result of the motor’s limitations. But any person using an e-bike will be pedaling as well. If an average person riding a bike tends to travel at speeds of around 30 miles an hour, imagine that kind of effort supplemented by an electric motor.

It isn’t just a matter of adding the maximum mileage of the motor to the maximum speed of the bike rider. E-bikes, after all, will not send riders tearing around on the streets at 60-70 miles an hour. However, what took maximum effort for you on a traditional cycle will be easier on an e-bike, enabling you to go faster and farther. 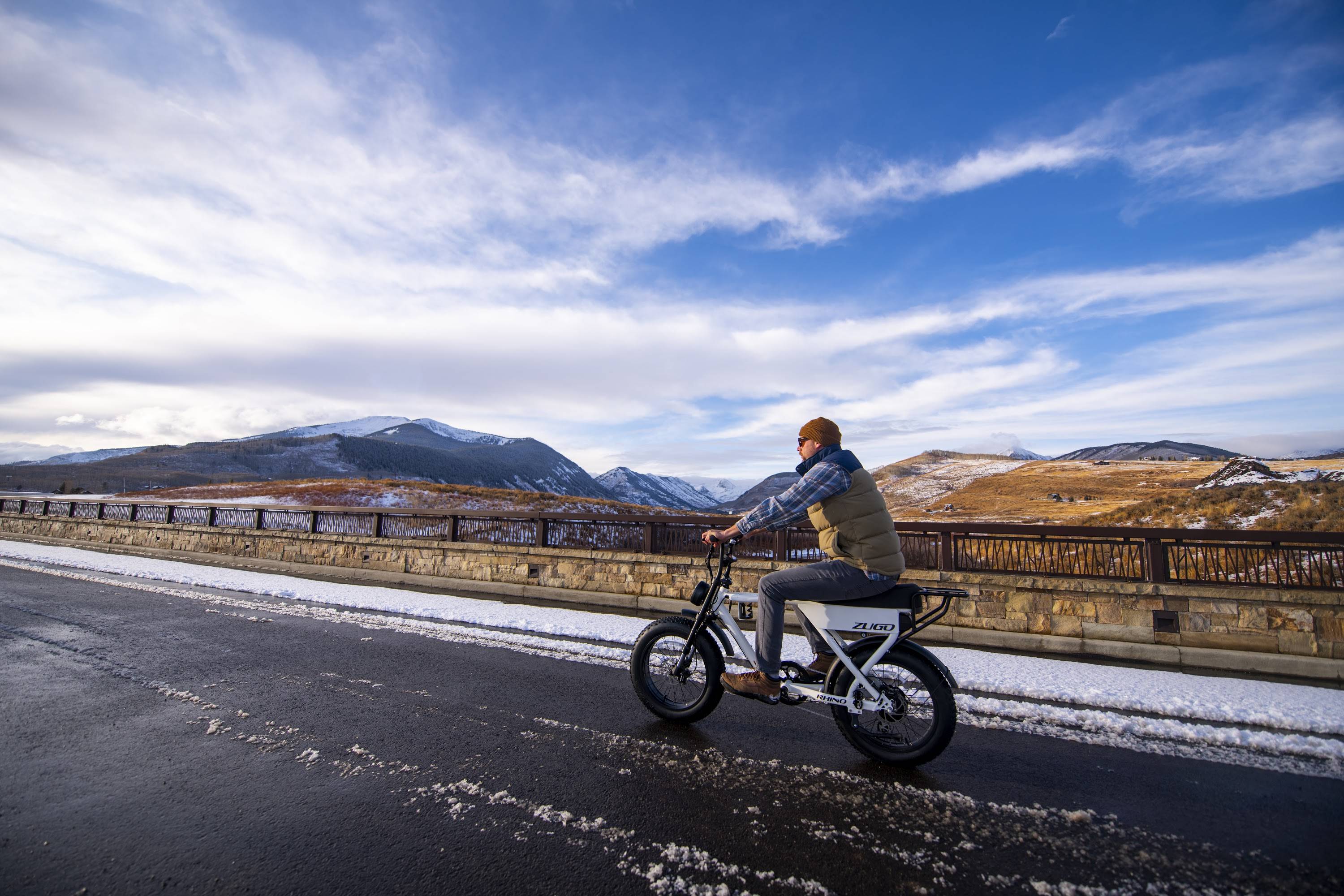 What’s it good for?

E-bikes do all the same things a traditional bike does but with a little extra oomph thanks to the electric motor. That expands the number of things you can do with an e-bike -- and the ways it can enhance the experiences bikes already provide.

For many, bike riding can be a daunting prospect. Even if they want to use a bike, it can feel like there are a lot of elements out there that make it difficult. Hills, long distances, the need to arrive places in a timely and clean manner—all these can be downsides to traditional bikes.

But an e-bike empowers you to try to commute, exercise, run errands, even date while cycling.

With an e-bike, you can see more national and state parks and go deeper into them. Even the places familiar to you will reveal new things to see and experience than they did when you were just hiking them. The e-bike lets you cover more ground and quicker, letting you go to places in the park you may have never tried before.

Exercise is a great activity to do with friends and family but everyone’s fitness level often makes it hard to find an activity for everyone. If you’re in anathletically mismatched couple, multi-generational family, or just a group of friends with different body types, an e-bike offers a way to exercise together in a way that keeps everyone happy and no one left behind.

Since riding an e-bike is easier, it also frees you up to talk to people a bit better while riding. Even the most serious runners or cyclists can’t talk for most of an intense workout because they need their breath for, well, breathing.

An e-bike lets you go places, burn calories, and still have enough in your lungs to discuss how your day is going.

An e-bike also represents a way to save money. By reducing your car use—or perhaps entirely replacing it—an e-bike will put money in your pockets in several ways.

Insurance rates go down the less you drive, and go away if you ditch the car. Spending less on gas is always a good thing, especially as it seems the price of fuel grows more erratic every day.

With an e-bike, you don’t have to worry about the price of parking downtown. Given the health benefits of exercise, it can even reduce how much you have to spend on healthcare every year.

What it is and what it represents

Simply put, an e-bike is a bicycle that offers pedal assistance via a battery-powered electric motor. It gives you the ability to assist your efforts a lot or a little, or change depending on the terrain and how you are feeling.

But an e-bike is so much more than that simple definition. The ZuGo Rhino offers riders a chance at different experiences, changing their lives, saving money, improving their health, and so much more.The e-bike may be the transportation of the future. Or at least your future.