Los Angeles has a well-earned reputation for being a very car-friendly city. Numerous films, shows, and sketches portray the City of Angels as a place that not only favors cars -- it’s downright obsessed with the various highways and back roads that crisscross the county.

But an interesting side effect of that hunger for the quickest route from A to B has been a steady increase in navigating the city via bike instead of car.

It’s an increase the city itself has taken note of and seems to be dedicated to fostering, as evidenced by their ambitious Bicycle Master Plan, a set of public works projects intended to make moving within the city on a bicycle easier and safer by 2032.

As LA works to realize the full scope of the project, though, many—including perhaps yourself—may wish to start eliminating arduous commutes and hours stuck inside a vehicle now.

This guide to making it work in Los Angeles will have you on your ZuGo Rhino in no time, appreciating both the beauty and convenience that ditching the car for the e-bike will give you.

As the 2032 Plan moves forward, not all routes to where you go will necessarily be intuitive. Bike paths and designated bike lanes do not all connect in clear ways as yet. So, some forethought and planning is not just an option but a necessity.

For Angelenos, this sort of thing should come fairly easily. In the same way, you may know that Olympic and Pico will help you make time when the 10 backs up, you can develop a sense of how to navigate the city on your e-bike.

Whatever route you choose, be sure to maximize your time on bike paths and in designated bike lanes for safety, speed, and ease of movement.

In the same way that you didn’t come to LA knowing that traveling East out of the City on the 10 is a better bet than on the 60, but instead learned that from resources and tips from others, so it may be to figure out e-bike travel.

Thankfully, there are plenty of resources available for you already.

L.A. Bike Trains offers something they call a “Bike Tutor.” These tutors will help new bikers learn how to travel the city and offer tips about safe routes, intersections to avoid, and much more. They offer a sliding scale for payments, meaning they fit well into any budget.

For those who would rather utilize an online community for refreshers and further tips, Reddit offers a subreddit dedicated entirely to traveling the city by bicycle and e-bike. There are plenty of active threads about commuting, riding for pleasure, and more waiting for you to jump on.

The power of computing

Once you feel confident with riding through Los Angeles, you’ll still want to make sure you’re planning the best possible routes.

Map My Ride providers with a resource that utilizes both human insight and computer power. It collects user-submitted cycling trails that include details like maximum and minimum elevations, where and how intense the hills are, and the distance of the path. Plus, the site allows you to zoom into a street-level map, giving you the chance to pick and choose aspects of established paths to chart your own.

Los Angeles Bike Paths is another user-created resource that specifically highlights the current existing bike paths. It often lets you know what terrain to expect—paved, sand, wetlands—so you can plan accordingly. They also mix in irreverent commentary about what you might see or encounter as you ride the path.

Maybe you’re the kind of rider who likes to see the full picture before zooming in to pick out the fine details. If that’s more your speed, this map will give you everything you need.

When planning your route, keep in mind that Los Angeles allows cyclists on sidewalks, not the case in every city. If you find there’s no way to avoid a particularly chaotic stretch of road or busy intersection, going the sidewalk route might just give you a little bit more safety. 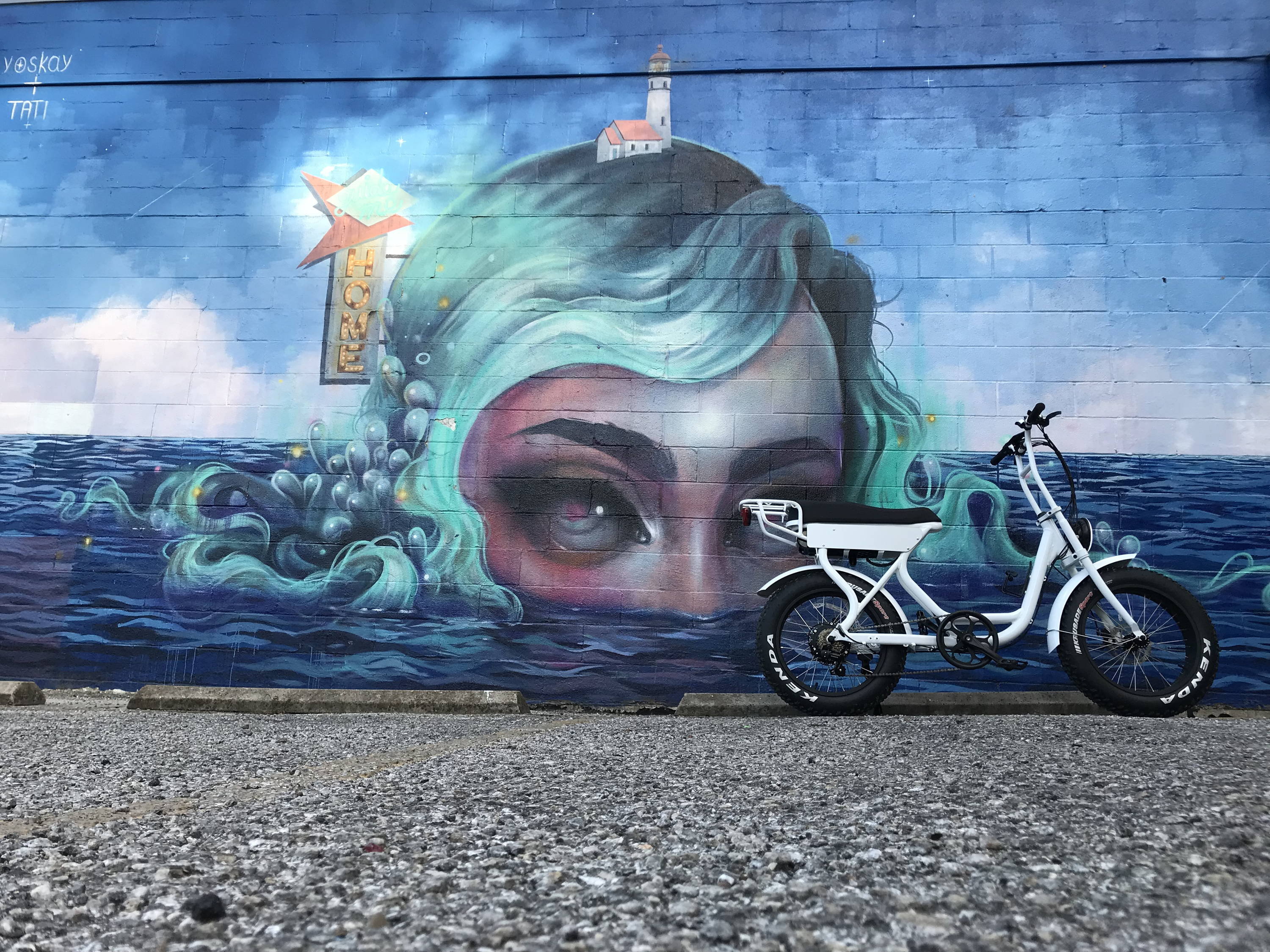 Safety, of course, isn’t entirely about choosing the right route and doing your best to stick to paths, trails, and designated lanes. There’s plenty you can do all on your own, much of it before you even start to pedal.

You can designate an emergency contact and mark the person on your phone too. If you end up in an accident or have some bike trouble, you can ask for help.

Any trip on your e-bike should involve checking what Bike Metro calls “The ABCs.”

First, Air pressure. Check your tires to make sure they’re properly inflated. Keep an eye out for any significant differences between the two tires and between now and the last time you rode. A tire still in the acceptable inflation range, but with noticeably less pressure than the last time you used it, might be revealing a slow leak. Checking it before riding will keep you from being stranded by the side of the road.

B stands for brakes. Do a brief brake check before you start to put your e-bike through its paces. You’ll want to make sure they’re engaged and they’re effective.

Finally, C does double duty—cranks and chains. Verify that both seem to be working as expected and neither is showing damage, rust, or any sort of object impediment.

Outside of the ABCs, do also give your lights a once-over. Even if you aren’t specifically riding at night, the recommendation is to have a light on your bike. Weather events can quickly turn the City of Angel’s usual sunny façade into stormy darkness and being visible will be a necessity when riding.

Other times you may be having so much fun, you’ll ride longer and later than you expected. Having a light means not having to cut a trip short if you’re enjoying yourself or being in danger if you lose track of time.

Speaking of time, if you’re someone who rides a lot, using a ZuGo Supercharger to refresh your Rhino’s battery would be a very good idea. With it, you’ll never have to worry about your battery being inadequately charged.

That means more rides with less time waiting in between and less anxiety about your battery running out of juice before you get back home.

E-bike users, like all cyclists, must navigate both laws and cycling etiquette standards to ensure their safety and the safety of others. With time, these rules, like traffic laws, will become second nature. As you start riding LA, it is a good idea to brush up on them both.

In California, all Class 3 e-bike—a category that includes the Rhino—riders need a helmet, regardless of age. You should check to make sure whatever helmet you’re using or will use has gained a seal of approval from The Consumer Products Safety Commission.

While no one is expecting you to dress like you’re racing in the Tour de France, it’s recommended that all riders, regardless of skill or intent, dress in bright-colored clothes. The darker it gets, the more important that becomes.

If you’re planning to ride at night, most would urge the use of reflective patches or stickers or clothing items with built-in reflectors. 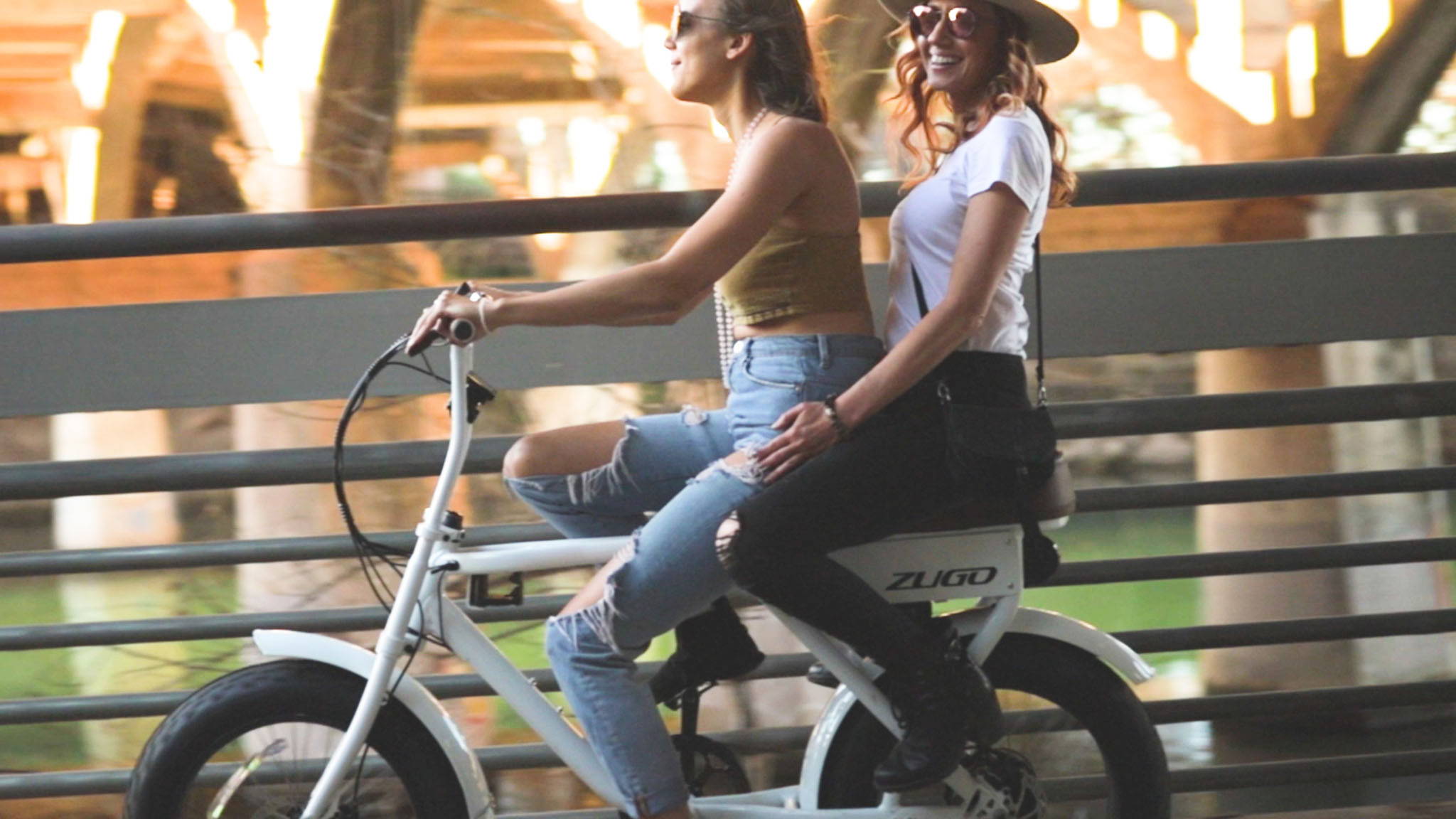 Put your e-bike to work for you

In testimonials and stories about cycling in Los Angeles, one complaint almost always arises the hills. And why wouldn’t people complain about them? LA has 3 of the 5 steepest streets in the entire United States. That means it outdoes even its famously- hilly California cousin, San Francisco.

Riding a Rhino gives you an immediate advantage over traditional bicycles. With pedal assistance, those hills will only be as much of a challenge as you want.

Looking to give your legs a workout? Choose a low setting. Prefer to get to work crisp and refreshed rather than tired and sweaty? Engage that pedal assistance at a high level.

Outfit your Rhino with a ZuGo Rack and the bike can do even more for you. Navigating Los Angeles will almost always require gear, whether it’s bringing your laptop into work or your towels to the beach.

With the Rack added to your e-bike, you can carry more gear safely and securely. With no need to worry about your stuff, you can focus more fully on the experience of riding your e-bike.

Find the joy in it

There are many reasons you can come up with not to ride your e-bike in Los Angeles. Even knowing the environmental impact, the exercise, and the potential to shorten your commute by avoiding traffic snarls, it can be hard to establish a new routine.

That’s why it’s important to find other motivations too. That could mean letting that extra exercise earn you a regular treat. It could be letting yourself stop off at a favorite store with the time and money you’re saving.

Whatever the case, let yourself incentivize your riding until it becomes your new habit. Once it does, we’re sure you’ll love it. Los Angeles may be a car city, but astride your ZuGo Rhino, you’ll quickly find that biking makes it more fun.